I remember that one of the things that surprised me most when I started in the world of renewables back in 2004 was to see that there were countries like Germany where the solar resource was very scarce and wind power was not much to be proud of, and yet they topped the world rankings for installations.

Over time, such cases have become more exceptional as the sector has gone from being totally incentive-driven to a highly competitive, liberalised market. This has meant that developers have gone from installing projects only in countries where there were incentives (feed-in-tariffs and the like), to looking for locations with a lot of resources to make projects viable without such incentives. 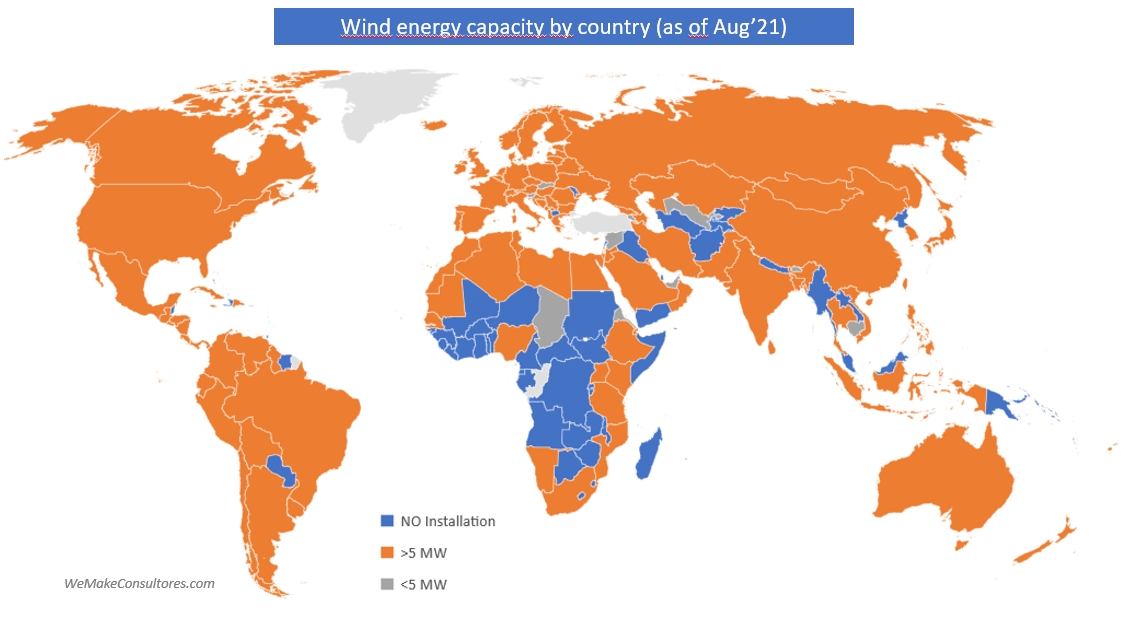 We see that as of August 2021, there were already 104 countries with >5MW installed. Obviously in this group there are big differences between countries such as China and the USA, which are well over 100GW, and others such as Djibouti, which in 2021 installed its first project with SiemensGamesa. But at least these 104 countries have experience in installing large-scale projects and therefore, to a greater or lesser extent, there will be a certain structure that will allow for future growth.

But if we look at the countries where there are less than 5 MW or even none at all, it is surprising to find no less than 92 states:

Among this group of countries, there are many that due to their small size it is normal that they do not have large-scale wind installations, but there are certainly striking cases. Let’s take a look at some examples with the help of the magnificent Global Wind Atlas, a free tool where you can consult wind resource data from all over the planet.

Afghanistan has a very significant wind resource. The windiest 10% of the country has an impressive average wind speed of 9.47 m/s at 100m. As can be seen on the map, this corresponds to the border area with Iran. It is likely that the country’s virtually uninterrupted war situation for more than 40 years is the explanation for not having started to exploit this vast resource.

The case of Cambodia is also striking because it borders other countries such as Vietnam or Thailand where wind energy has grown significantly. But in this case we can clearly see that it is a region with little wind resource, with a meagre 5.6 m/s @100m in the 10% windiest part of the country.

There are many African countries in this list and many of them are large like Congo, Central African Republic or neighbouring Cameroon. But in all these cases, they are very low wind areas where it will be very difficult to see projects in the future.

The opposite is the case a little further north: Chad, Sudan and Niger. Chad has an incredible resource, with large areas that are well above 10 m/s @100m on average. Sudan is not far behind. The instability and poverty of the whole area make projects there difficult, but it is undoubtedly one of the areas of the world with the greatest untapped wind potential.

We continue with African states. The Horn of Africa is an area with a large wind resource. Somalia stands out with 9m/s @100m in the windiest 10%. Yemen and Oman also have a considerable resource and large uninhabited areas to develop projects. The situation of instability and war in Somalia and Yemen makes it difficult to see projects in the short term, but Oman is a much more stable country and although it has a lot of natural gas, it may follow the trend of its neighbour Saudi Arabia and begin to diversify its generation mix to include wind power.

There are few European countries on the list and it is surprising to find Slovenia and Slovakia. They are both medium-sized countries with an acceptable resource. In fact, we see that Slovenia has a 7.2 m/s @100m in the windiest 10%, higher than other countries in Europe where there is a market, such as Hungary or the Czech Republic.

Uzbekistan and Turkmenistan are two neighbouring countries that have a lot of surface area and a lot of wind but are not exploiting it. It is an area very rich in natural gas which is used not only to generate electricity, but also as a main export. This is probably the main reason why the exploitation of wind resources has not been encouraged.

Syria is another case of a state with good resources and space, but where instability prevents the development of large-scale projects. This is also the case in neighbouring Iraq, where, as a major oil producer, there is little incentive to invest in renewables. In any case, it is unlikely that we will see much wind power in this area, as solar is probably better suited to its needs.

There are not many American countries on this list. Paraguay and Haiti are perhaps the most relevant. In the case of Paraguay, the resource is not very abundant, which may explain the absence of wind farms.

We end our tour around the world with a curious case: Iceland. It is one of the countries with the most wind in the world (if not the most). According to data from the wind atlas, half of its surface area has winds in excess of 10 m/s @100m. But it has no commercial wind farms. And the reason is that it does not need one, as 100% of its electricity comes from renewable sources (75% hydro and 25% geothermal). Perhaps in the future, it will consider becoming an exporter of wind energy by installing floating offshore wind farms, but for the time being, we will continue to see no turbines in Iceland.

As we can see, there are still many countries where there are no wind installations, yet there is a large resource available. Instability and wars are one of the causes that prevent development, but there are other causes such as the abundance of fossil fuels or difficult terrain. We are sure that little by little we will see how this list of 92 countries is reduced.

Solar potential by country
Scroll to top
Gestionar el consentimiento de las cookies
We use our own and third-party cookies to anonymously and statistically analyze your use of the website, improve the content and your browsing experience and in this way offer you the best possible browsing experience. You can get more information at:
Manage options Manage services Manage vendors Read more about these purposes
View preferences
{title} {title} {title}