Following last month’s article on countries that, for one reason or another, do not exploit their wind resources, I received several questions about whether something similar is happening in the solar sector. So in this article we are going to pack our bags again and take a trip around the world to see if it coincides that where there are more solar resources is where photovoltaic solar energy is being developed the most.

According to Wikipedia, the energy that reaches us from the sun every hour could cover all the planet’s energy needs for a year. Although not all of it can be harnessed by photovoltaics, it is estimated that currently covering 0.3% of the earth’s surface with panels could meet the entire global energy demand. The solar potential is impressive, but varies greatly from country to country for obvious reasons: level of irradiance, available surface area, orography, etc.

The first thing to do is to characterise the different countries according to their solar resource, i.e. the amount of solar radiation they receive, known as irradiance. This is measured in W/m2 and interactive maps with irradiance levels can be found on the superb Global Solar Atlas website:

But irradiance is not everything when it comes to measuring the solar potential of a region, it is also influenced by temperature (the hotter it is, the less efficient it is), type of terrain, orography, etc. As explained here, if we take these factors into account, we can create a value that represents more realistically the solar potential of each area: this is the so-called PVout, which is the ratio between energy obtained (kWh) and installed power (kWp), i.e. how efficient and productive the solar plants are in each region.

Although both maps are very similar, if you look closely you can see that the PVout of colder areas improves with respect to their level of irradiance (for example Mongolia and China).

The next step is to obtain the data of installed solar MW in each country. To do this, we use the data from OurWorldinData, which is updated to 2020 and uses BP data as a source, which in turn takes the data from IRENA.

At this point, it should be made clear that the statistics for solar PV capacity is one of the most confusing in the renewable energy world. While with other sources such as wind there are practically no differences between the different data sources (the differences usually come from when the installations are recognised as connected), in the case of solar the differences are very large and there are basically 2 reasons for these disparities:

– MWac vs MWdc: this is another perennial problem. There are countries and associations that give the data for peak or DC installations while others give it at the point of connection or AC. And taking into account current levels of over-installation, the differences can be as much as 50%.

This means that any statistics on MW installed per country are merely indicative, as there are bound to be mixed criteria and poorly collected historical data.

In our case, BP and IRENA count MWac. 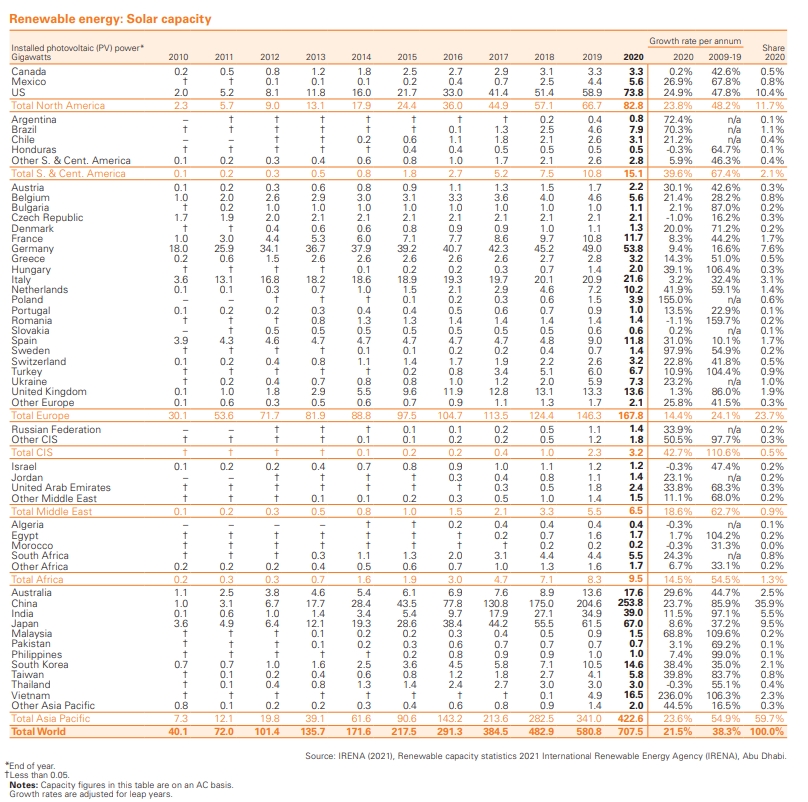 In order to be able to compare the different countries without their surface area and population marking the analysis, we divide the installed capacity by the total population of the country, obtaining the capacity per capita. Although it penalises densely populated countries such as China or India, it can serve as an indicator of growth potential.

Once we have the PVout and the MWac per capita of each country, we are going to cross them to see how the different states look like: 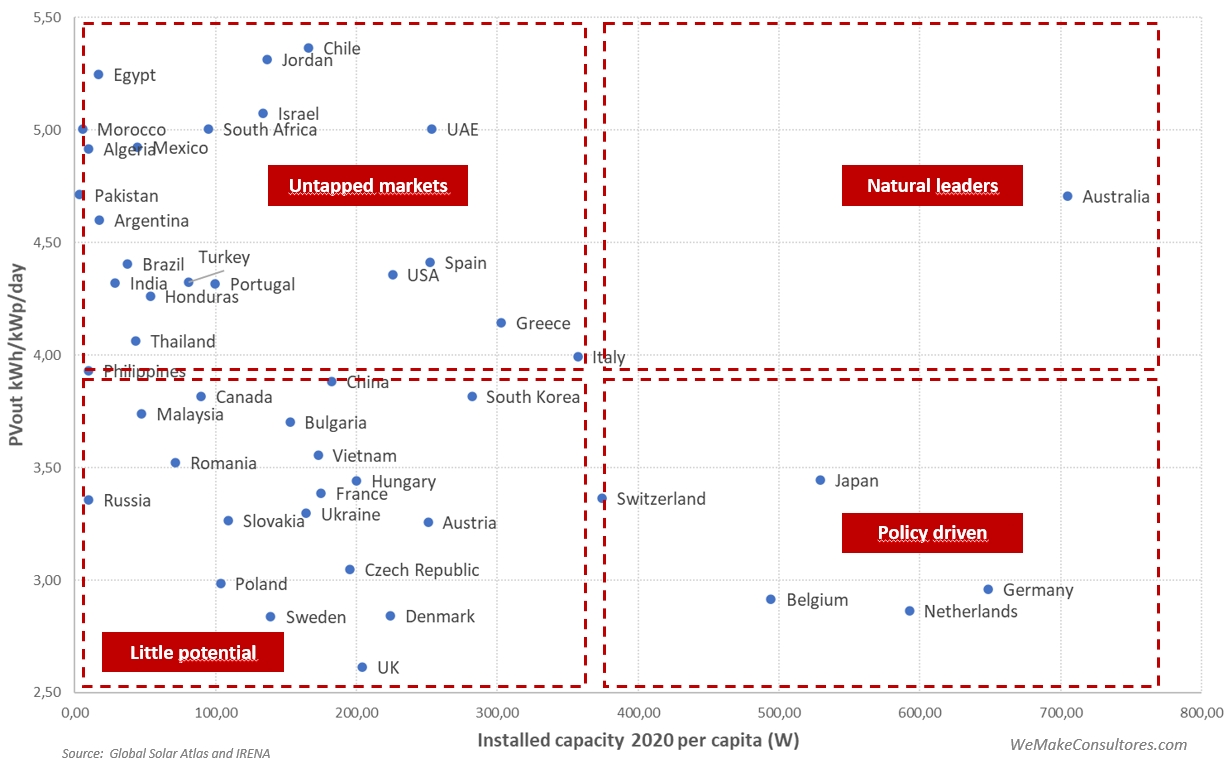 We can see how the countries can be grouped into 4 large groups:

The potential for solar PV is enormous, although there are areas where the resource is of such quality that the LCoE of production is greatly reduced. It is to be expected that these areas will lead the installation statistics in the near future, although self-consumption and low installation costs ensure that all countries will continue to grow to a greater or lesser extent.

Windeurope 2022 summary: few novelties, some pessimism and many nice re-enc...
Scroll to top
Gestionar el consentimiento de las cookies
We use our own and third-party cookies to anonymously and statistically analyze your use of the website, improve the content and your browsing experience and in this way offer you the best possible browsing experience. You can get more information at:
Manage options Manage services Manage vendors Read more about these purposes
View preferences
{title} {title} {title}