During these months of lock-down we are witnessing record figures of renewable penetration in the generation mix due to a reduction in demand on the one hand and the growing number of solar and wind power installations in the world on the other. In a sense, it has been like a preview of what the generation mix will be in the future when variable renewable VRE (mainly wind and solar) will provide most of the electricity production.

But for that to become viable, it is necessary that wind and solar be installed on a large scale (which is already happening) but also that these be manageable, considering that they are intermittent resources. And this is where two basic elements come in: the interconnection of networks and storage.

– To provide ancillary services to the networks to maintain their stability

– Serving as a resource for meeting peaks in demand

Despite being one of the pillars of the energy transition, it is an emerging sector that is quite unknown but where 2020 seems to be a definitive take-off year.

Energy storage has traditionally been done with hydraulic pumping stations, but it is the Lithium Ion batteries that have come to revolutionize this market. 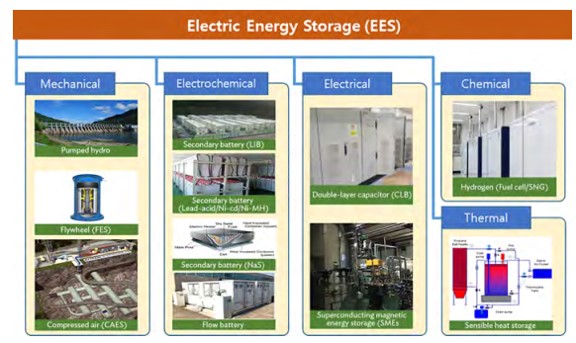 There are 4 types of storage devices:

– Mechanical: these are the traditional ones such as hydraulic pumping and compressed air (CAES). Here we are also seeing new concepts such as those based on gravitational systems with start-ups like EnergyVault or Gravitricity

– Electrochemical: batteries of different technologies such as LiOn, flux or NaS

– Thermal: heat-based systems such as CSP molten salts or new concepts such as HighView power

As It can be seen, there are a lot of technological solutions, from super mature ones like hydraulic pumping to new concepts like gravitational or flow batteries. 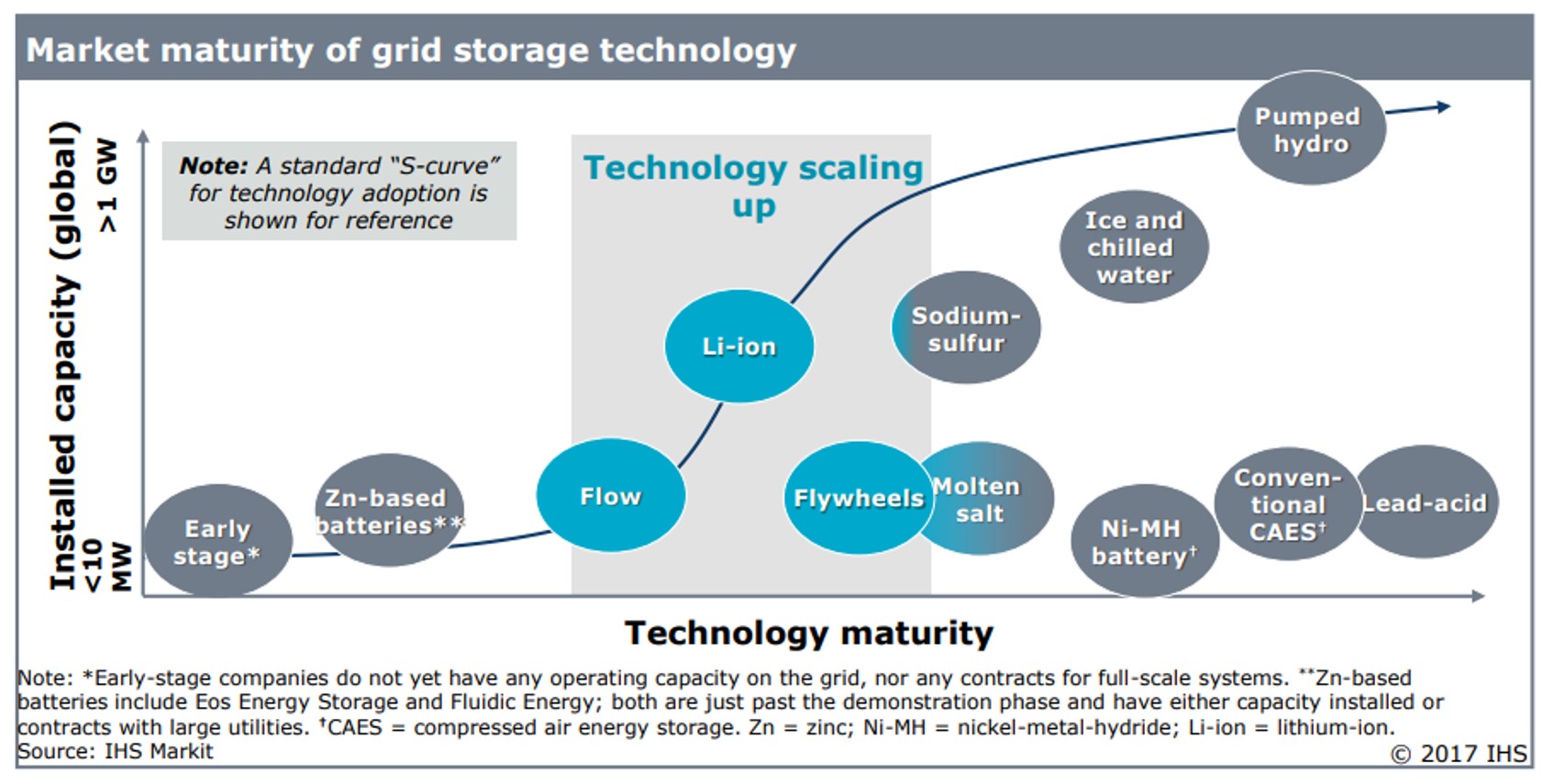 In addition, each technology has power and durability capabilities. To understand these 2 concepts, the bottle analogy is very useful: the power (MW) would be the size of the mouth and the energy (MWh) would be the capacity of the container. The relationship between capacity and power is the duration (h), that is, the time it takes to empty the bottle. 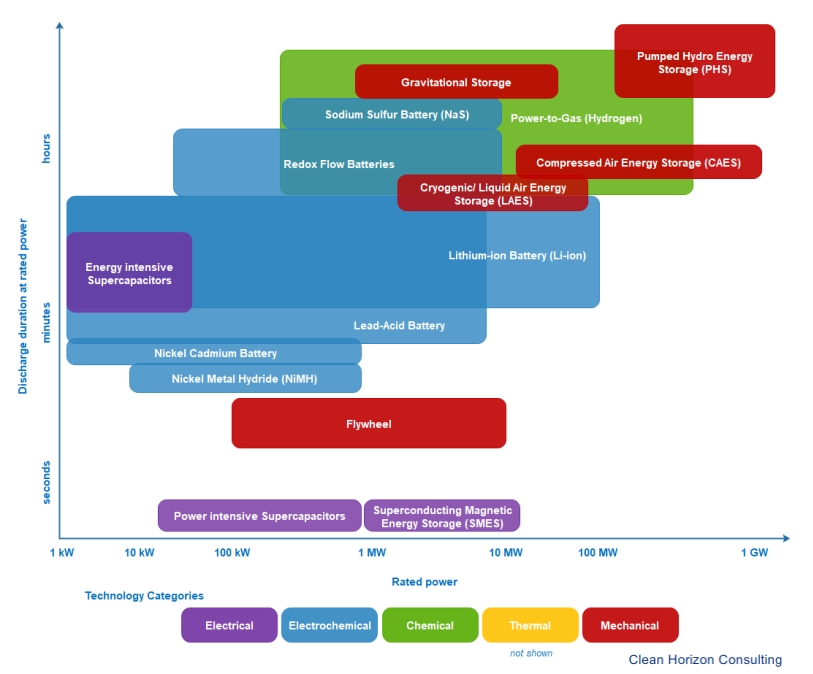 A third element to take into account is the energy density. Hydraulic pumping can generate hundreds of MW during hours, but it needs a giant volume to do so (in addition to geographical limitations)

And of course, there is the main business criterion: cost. And this is where LiOn batteries are currently unbeatable, and forecasts say that the manufacturing volume of EVs will make them much cheaper in a few years. 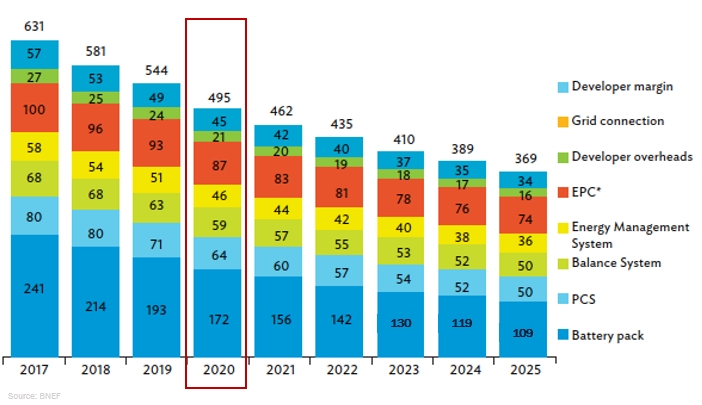 Maturity, cost, efficiency and energy density are the main reasons why 90% of battery storage projects are currently using LiOn technology. 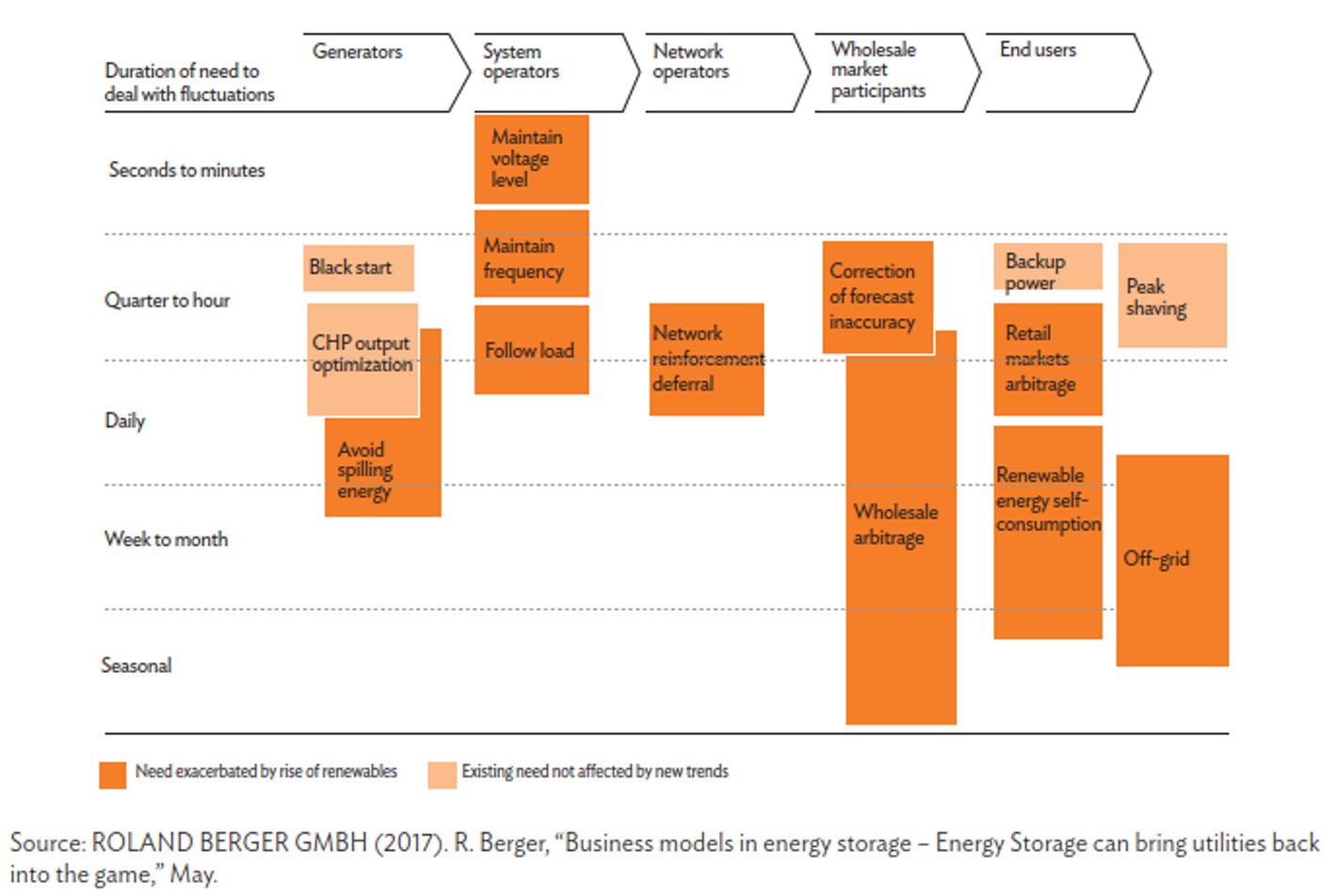 There are many theoretical applications for storage and in the future, as the penetration of variable renewables grows, even more will emerge. We can group them into large groups: 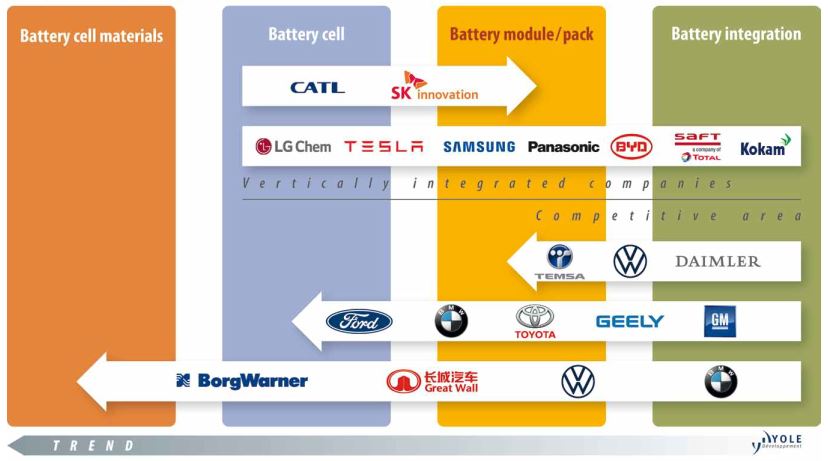 Although the energy storage market is a relatively small and immature sector, its value chain is one of the most competitive and with large players because it shares the market with the electric car. Broadly speaking, these are the main companies:

As Sergio Fernández Munguía explained very well in a recent article on the future of battery manufacturing, the EU is making efforts not to be left behind in this business. Personally, I think that both the EU and Spain should focus their efforts on positioning themselves with leading companies in the integration and development part, because that is where the value is and where you can take advantage of the experience of wind and solar, where we are world leaders. In Spain there are already companies offering very interesting integration solutions such as Gamesa Electric, Power electronics or Ingeteam and there are also start-ups such as BeePlanet that are oriented towards the circular economy with integrated proposals with a lot of potential

As we have seen, there are many applications for batteries, but the five that are currently pushing the market for assured revenue streams are the following:

1) Solar+Storage: many announced projects, among which the recently approved Gemini in the USA with 690MW PV + 380MW/1400MWh storage. In Hawaii, the successful bidders have just been published who will execute several solar+storage projects for a total of 460MW and 3GWh. In Europe, the Cleve Hill project has recently been announced in the UK with 350MW PV+350MW/700MWh.

2) Peak demand generation, i.e., replacement of the famous “peaker” plants in the USA. These plants are oil or gas fired and meet peak demand. They are characterized by being very old, polluting and have very low operating hours. In this page it can be seen some of the more than 1000 that there are in the USA and it calls the attention the very low capacity factors that they have. Either because of their low economic sense or, above all, because they are very polluting (and many within urban areas), they are perfect candidates to be replaced by batteries as they can ensure more hours of storage and the LCoE is reduced. In a recent article by BNEF, it was already confirmed that in many projects it is already cheaper to install batteries than peakers. Several projects are already being announced, especially in California, and the 100MW/400MWh Alamitos project developed by AES/Fluence is under construction and will be operational in 2021. Most of the projects are currently of 4h duration but there have already been some announced in Hawaii of 8h, figures that would open a lot the range of peakers plants to replace

3) Network stability and ancillary services: this is the main source of revenue in markets with semi-isolated networks such as Australia and the UK. The most famous project is Hornsdale 100MW/129MWh by Neoen in Australia, a project that Tesla executed in record time after a bet by Elon Musk via Twitter.

4) Energy shifting: these are batteries that store energy at cheap hours and sell it at peak times. In addition to that, they provide other services because one of the keys to storage is trying to exploit the asset for as many (paid) applications as possible. There are projects already underway that, due to their size, will mark a turning point in the market:

5) Virtual Transmission: Batteries located in substations can serve to avoid installing more transmission and distribution capacity by optimizing flow and existing lines. Fluence is very active in this field and has recently proposed a 250MWh installation in Australia to avoid building a transmission line. In Spain, and on another scale, Iberdrola has carried out a 3 MWh project in Murcia, avoiding the installation of distribution lines. There are much more ambitious proposals for this line in countries such as Germany with GridBooster or France with RINGO

As seen, there are already many projects of more than 100MW and 4h duration, figures that seemed unthinkable a few years ago. It seems that storage batteries have come of age and in the next few years we will see more and more applications where they will be profitable. The technological and cost evolution is taken for granted, but there must be a strong commitment in the legislation to accelerate its growth and thus support renewable electricity generation.