During the recent celebration of the (failed) COP25 in Madrid we have been flooded with information about climate change and its consequences. Most of the news say that if we continue like this, the average temperature will rise by 4ºC and the level of the oceans by up to 1 metre, data that are quite scary as they would lead us to catastrophic situations (see the recreation of San Sebastián). These data have led many “activists” to embrace apocalyptic discourse as a tool to try to awaken society, but what has struck me most is that very relevant voices in the fight against climate change are criticizing these apocalyptic messages and question the validity of the most pessimistic scenarios.

Honestly, I was in the most complete ignorance of these scenarios so I have spent some free time researching a bit in order to better understand the predictions that are handled…and this is the brief diary of my trip to the center of climate change predictions:

– Day 1: I leave Ignorance City on my way to the Basic Concepts district full of energy and determination to find my way out of the maze of predictions of global warming. 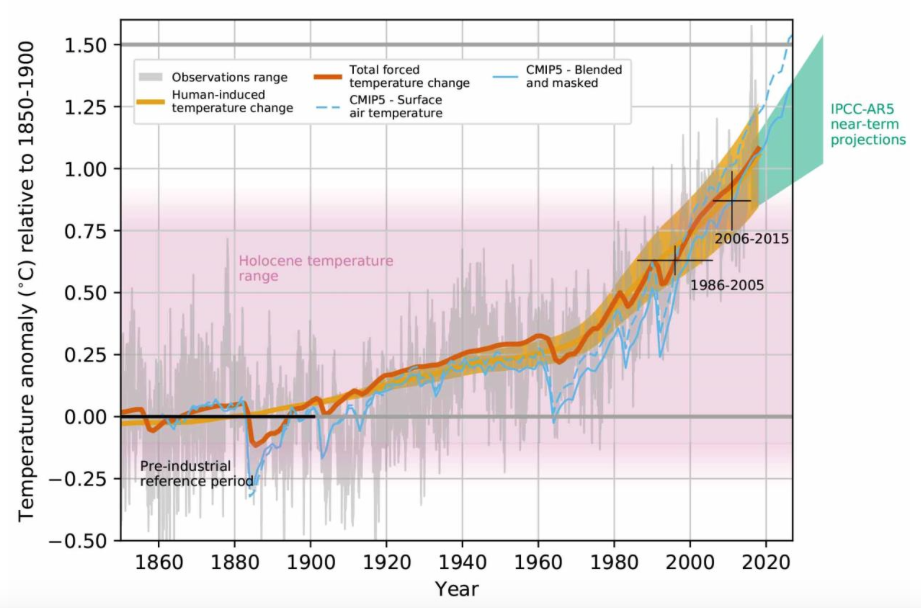 The IPCC is the UN’s panel of experts responsible for analyzing climate change and generating scenarios for states to take the necessary measures. Its conclusions are the Assessment Reports (ARs) and currently the most recent is AR5. It is therefore an analysis that evolves and improves with each review.

Note for the logbook: it seems that the IPCC is a panel of super-experts on climate, but there does not seem to be as much expertise in other key fields as energy….

– Day 2: I leave Basic Concepts district in good spirits and direct my steps towards the RCP towers where I hope to find some answers…

Representative Concentration Pathways or RCPs are the different levels of particle concentration that were created as representative scenarios for 2100. They are data sets that simulate an evolution of greenhouse gases. They are very complex scenarios but whoever wants to go deeper, this link is explained in detail. Initially there were 4: RCP8.5, RCP6.0, RCP4.5 and RCP2.6. Later RCP7.0, RCP3.4 and RCP1.9 have been added. In theory these scenarios should have been created with parallel scenarios of how society (energy, population, industry, legislation, etc.) evolved to reach such emissions, but for reasons of time the RCPs were published without associated social scenarios.

Note for the logbook: it is clear that in the origin the RCPs did not have an associated probability of occurrence as they were modeling scenarios. But taking RCP1.9 (Paris 1.5ºC scenario) or RCP8.5 (apocalyptic) is very different…

– Day 3: The visit to the RCPs towers has generated more questions than answers, but I recover my spirit when I see in the distance the imposing basilica of the SSPs…it is time to throw a little light to this sea of darkness….

Shared Socioeconomic Pathways or SSPs are the complementary piece to RCPs. They are economic, political and social scenarios that explain the evolution of emissions. It is complementary because it presents the levers that should be moved to vary RCPs. They are, therefore, the keys to creating policies against climate change.

The process to go from SSPs to temperature variations is not immediate. There is an excellent article where it is explained in detail but I have tried to summarize it in the following graph:

There are 5 SSP models that are based on “narratives” of evolution: from the SSP1 that assumes that the world becomes sustainable to the SSP5 that assumes economic growth based on fossil fuels. From there, there are extremely complex simulation models that translate “social” inputs into CO2 emissions and temperature.

Note for the logbook: again the problem of which scenario is more likely, why take as a reference the SSP5 and not the SSP1?

On the other hand, as it could not be otherwise, this prediction is based on models and we are certainly starting in this field. Surely the models will be improved in successive iterations and within a few years the current ones will be seen as primitive tools with great level of uncertainty. Also the growing computing power will allow to handle more complex models.

– Day 4: The basilica of the SSPs is so big that I decide to spend one more day visiting their crypts, vaults and towers. Maybe there I’ll find what I’m looking for…

It is interesting to compare these scenarios with some given by energy experts such as McKinsey or DNV.

The disparity of scenarios on the weight of renewables and coal between energy experts and SSPs is clear. While DNV talks about renewables accounting for 34% in 2050, the most optimistic SSP1 scenario is 25% in 2100. With coal it is even more striking: both DNV and McKinsey give it a marginal role in 2050 while, for SSPs, coal will remain the protagonist in 2100.

Note for logbook: It is strange that the IPCC experts who have made the SSP energy evolution hypotheses are not the same energy experts who are the reference in the sector (Bloomberg, DNV, McKinsey, IEA, etc). This seems to be a serious weakness in the SSPs that will surely be resolved in the next revision because the current scenarios do not make much sense, especially the SSP5.

Furthermore, it seems that the models give a lot of prominence to active carbon capture systems (BECSS or Bionergy with carbon capture&storage), which does not seem a good idea as they are either not technologically available or are expensive solutions that only try to justify the use of fuels with emissions. The only carbon capture system that should be modeled should be that of forests.

– Day 5: The SSP basilica has left me with a bittersweet taste: impressive on the outside, but with leaks inside. I want to finish the journey in style so I decide to visit the library of predictions…

We can now put all the ingredients together to get an overview of the predictions. 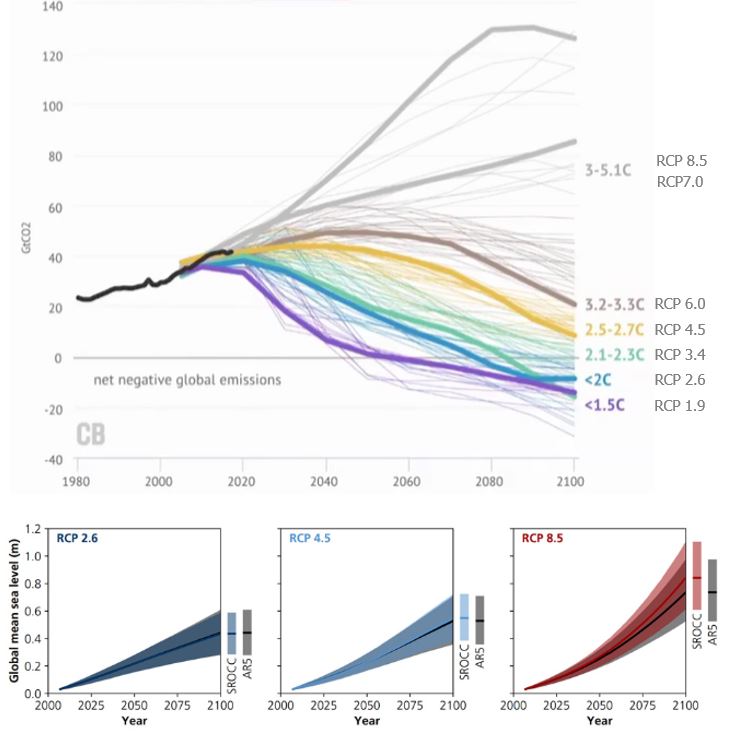 As can be seen in the graph above, the range of simulation scenarios is very wide and ranges from scenarios compatible with the agreements of Paris <1.5ºC and less than 20cm of sea level rise to scenarios of 5.1ºC of temperature rise and more than 1m of sea level. If you want to learn more about simulation details, please read this article

Note for Logbook: According to legend, the famous oracle of Delphi had an inscription that read “Know thyself”. I think in this case, the inscription on my journey would be “Listen to science and act quickly”.

In summary, great level of uncertainty still, but one thing is clear: the only way to reduce uncertainty and increase the probabilities that in 2100 we are in a scenario type RCP1.9 is to act and act now. And one last message for the negationists: if you don’t act at all levels, uncertainty can also go against you with negative events that you still can’t imagine… we’re on a road never before travelled so it’s best to be prepared for what might come…