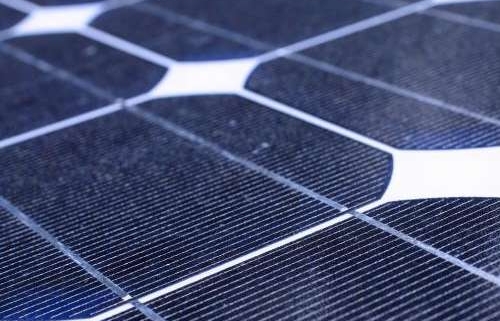 109 GW is the solar photovoltaic capacity that was installed in 2018 worldwide. To put this figure into perspective, it is more than twice as much as wind farms in 2018 or the equivalent of installing about 130 nuclear reactors. And according to the main forecasts, in 2021 the barrier of 150 GW of annual installation will be surpassed. With these figures, it is obvious that solar PV is already, and will be even more, the main technology of electricity generation.

A few weeks ago I had the opportunity to attend the main solar fair in Europe, Intersolar Munich, and see firsthand the main novelties in the sector. With the news of the fair and the help of the forecasts of the most exhaustive technological report of the sector (ITRPV from VDMA), let’s review the 6 main product trends of the sector:

These numbers refer to two major frontiers of solar technology: 400W of power per module and 20% of cell efficiency (PERC technology). Both are already widely surpassed, as could be seen in Intersolar’s new launches. In fact, there are already some who speak of 500W and 25% efficiency as the next frontier to be overcome in the coming years.

What is clear is that no sector is sustainable by improving on the basis of eliminating margins in the supply chain so the solar will have to make an effort to achieve the expected improvements without sacrificing profitability. 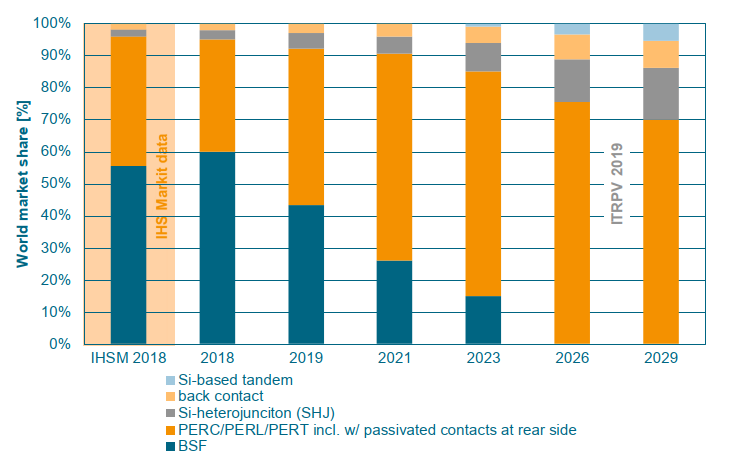 As the ITRPV graph shows, Mono-PERC technology is going to be mainstream in the coming years.  And these forecasts are usually very reliable because they are based on the installed capacity of manufacturers and orders for manufacturing machinery for the coming years. In addition, improvements are already planned for PERC technology such as n-type and TOPCON. Farther away is another very promising technology such as the HJT, with high performance and supported by industry giants such as Panasonic and Meyer Burger.

Beyond acronyms, the tendency is to give a lot of volume to a technology with room for improvement so that the holy grail is obtained: cost reductions and at the same time performance improvement. 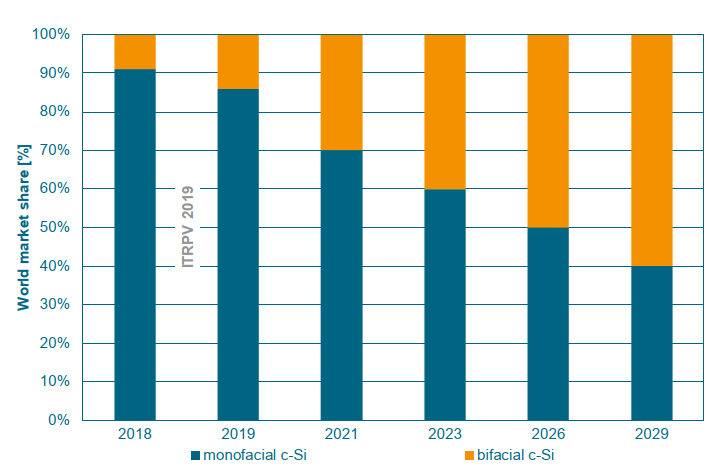 Although the VDMA report is not particularly optimistic about the transition to bifacial, my impression after Intersolar is that bifacial technology is unstoppable and that we will see a very rapid transition. As soon as the measurement and certification methods are standardized and investors have confidence in them, it will become one of the best tools to improve LCoE. In addition, Trump’s recent decision to exempt bifacial modules from import tariffs for sure helps speed up the transition in the USA. 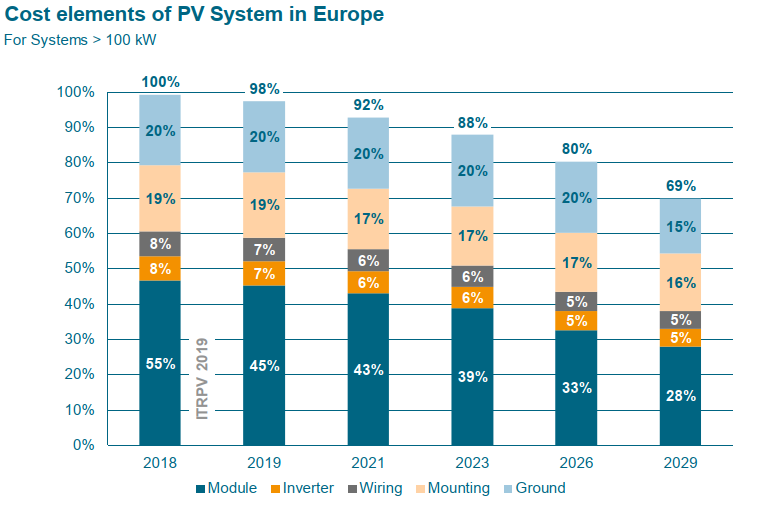 The inverter does not reach 10% of the capex of a park but its importance is much greater than its cost indicates: it is the brain of the plant and is therefore the gateway to the long-awaited value-added services and the “Smart-grid”. It is therefore a strategic component in which companies such as Huawei, GE, Siemens or ABB fight for hegemony.

The main types of product are:

– MLPE: on the one hand, in the residential segment there is a tendency to modularize and integrate the equipment into the module (the so-called MLPEs or module-level power electronics), a trend that is very much liked by the big players of the modules who see it as an extension of their scope.

– String: companies with electronic background such as Huawei have entered this sector with small modular equipment similar in hardware concept to data routers. With this concept and an aggressive pricing strategy, they have become market leaders.

– Centrals: are the traditional inverters that are installed in containers or platforms and that go with their integrated medium voltage equipment.

And the curious thing is that there are 2 tendencies that can seem contradictory: on the one hand the MLPEs are miniaturized and by means of great volumes, they threaten the position of the string in residential and commercial projects. And on the other hand, power plants and string for utility projects tend to grow in size to achieve LCoE reductions by reducing logistical, construction and service costs. In the last Intersolar, Sungrow launched the most powerful string on the market with 250kW while Gamesa Electric launched one of the largest inverter with 3750kW nominal power and integrated solution up to 7500kW.

For the moment being, central inverters keep being the top pick in utility-scale projects and they promise further LCoE reductions by growing in power and improving reliability. 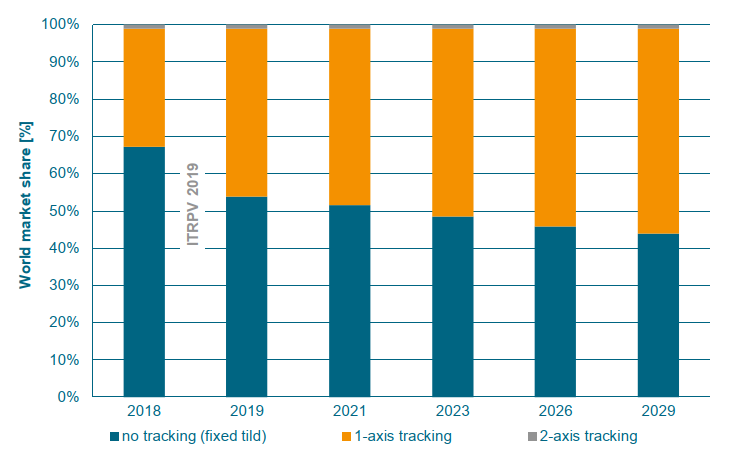 Here the tendency is not only that those with 1 axis are the clear technological winners, but that trackers have become a very important element of efficiency improvement. Companies such as NexTracker have gone beyond optimizing metal structures and added the value of control algorithms to optimize orientation. And with the advent of bifacials, this optimization will be even more important.

A few months ago, the World Bank published an interesting report on the status of floating solar projects in the world and I was very impressed by the data they gave on the available potential.

Simply by using 1% of the reservoir surface area, 400GW of power would be installed. But this potential is still theoretical; the important thing is that they are very viable projects and little more expensive than projects on land. China is currently leading this field but it would not be uncommon for us to see legislation in the near future in Europe that obliges electric companies to install floating solar in their reservoirs (for both new and existing projects). We have already started to see tenders to install floating projects such as the one recently launched in Thailand.

We will pay attention to the technological evolution of the sector which, like good action films, promises 2 things: speed and surprises.

Auction prices and LCoE: shaken, not stirred
Scroll to top

We may request cookies to be set on your device. We use cookies to let us know when you visit our websites, how you interact with us, to enrich your user experience, and to customize your relationship with our website.

Click on the different category headings to find out more. You can also change some of your preferences. Note that blocking some types of cookies may impact your experience on our websites and the services we are able to offer.

These cookies are strictly necessary to provide you with services available through our website and to use some of its features.

Because these cookies are strictly necessary to deliver the website, refuseing them will have impact how our site functions. You always can block or delete cookies by changing your browser settings and force blocking all cookies on this website. But this will always prompt you to accept/refuse cookies when revisiting our site.

We fully respect if you want to refuse cookies but to avoid asking you again and again kindly allow us to store a cookie for that. You are free to opt out any time or opt in for other cookies to get a better experience. If you refuse cookies we will remove all set cookies in our domain.

We provide you with a list of stored cookies on your computer in our domain so you can check what we stored. Due to security reasons we are not able to show or modify cookies from other domains. You can check these in your browser security settings.

These cookies collect information that is used either in aggregate form to help us understand how our website is being used or how effective our marketing campaigns are, or to help us customize our website and application for you in order to enhance your experience.

If you do not want that we track your visit to our site you can disable tracking in your browser here:

We also use different external services like Google Webfonts, Google Maps, and external Video providers. Since these providers may collect personal data like your IP address we allow you to block them here. Please be aware that this might heavily reduce the functionality and appearance of our site. Changes will take effect once you reload the page.

The following cookies are also needed - You can choose if you want to allow them: