August is the month of the beach and holidays but it is also the time for the presentation of results for the first half of the year, so let’s take a look at the main turbine manufacturers to see how they have been doing, although I can already tell you that there is no good news…

But instead of just looking at the last quarter, let’s pull up Excel to see the evolution of the last 6 quarters to try to guess some trends that will allow us to make assumptions about the coming months. 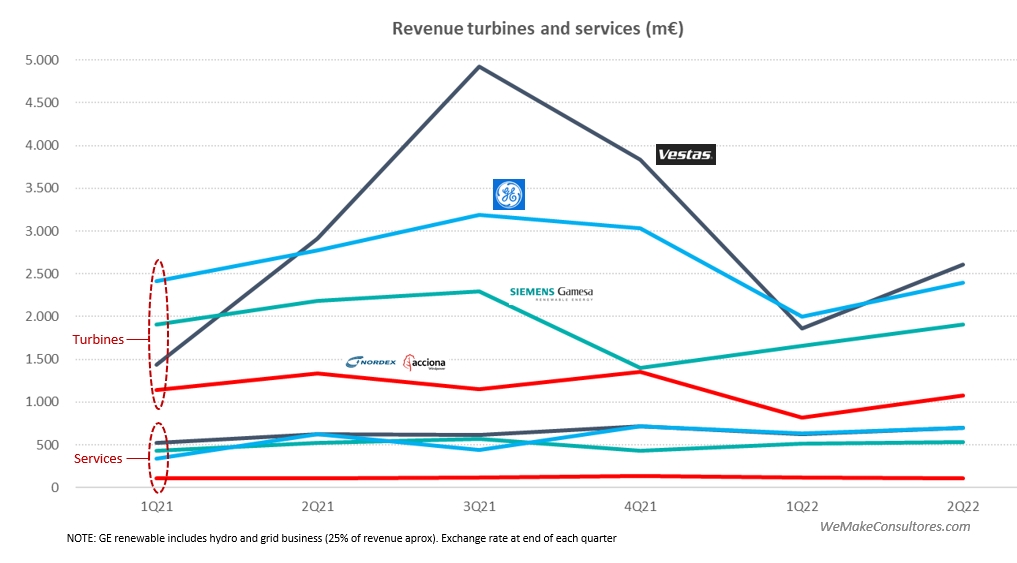 Revenue breakdown by business and OEM

OEM revenue data is traditionally seasonal with a very active end of year and a weaker first quarter. On the turbine sales side, we can see that 4Q21 was not as good as it should be (with the extreme case of SGRE even reaching its minimum). The rest reached their minimum in 1Q22 as expected, but the recovery in 2Q22 seems very timid.

On the services side, we can see what we already knew: it is a much more stable business with regular and predictable revenues, i.e. the dream business of any financier. 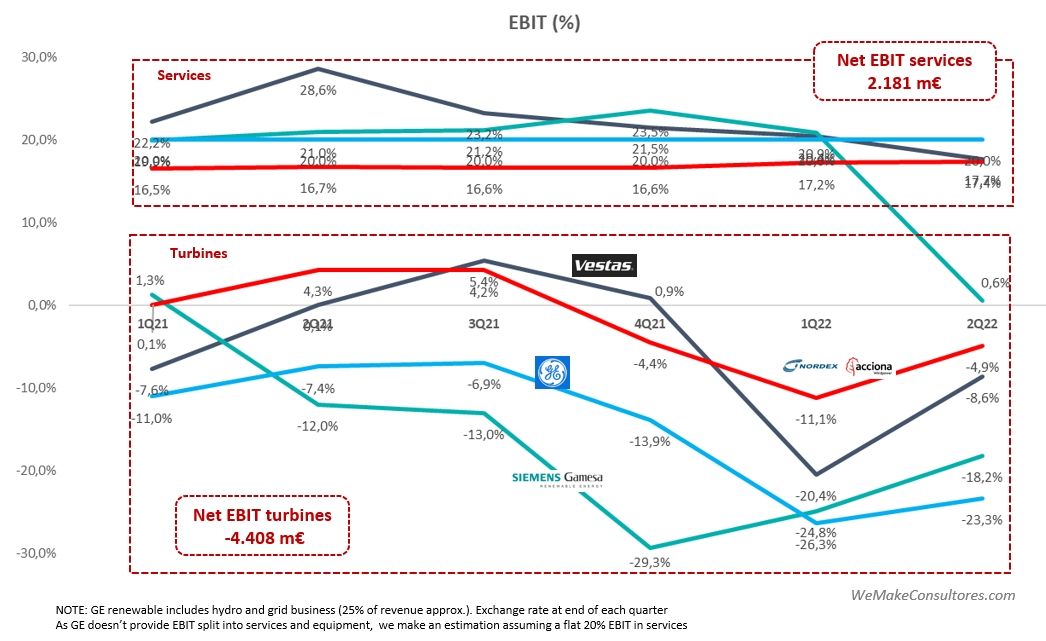 EBIT (%) breakdown by business and OEM

Now we come to the main issue, the one that has the sector’s head spinning: profitability. The first thing that becomes clear is the stark difference in profitability between the turbine sales business and the service business. While services remains stable at around 20% (with the exception of the last quarter where SGRE has had reliability problems in the USA), turbine sales are struggling to stay in the black.

The second thing we can see is that it seems that the profitability floor was reached in 1Q22 (except for SGRE, which reached it in 4Q21) and it seems that in 2Q22 things are starting to improve, albeit timidly.

The third thing that is striking is the number of quarters that SGRE and GE are enduring with heavy losses. In fact, in these last 6 quarters, the 4 OEMs have had a net EBIT result from turbine sales of -4,400m€, an impressive figure that is not compensated by the profits from services. It is a real problem that the technological and manufacturing engine of one of the pillars of decarbonisation is in a critical state. We will see how much patience shareholders have to bear this situation, but examples such as the shareholders of Nordex (Acciona at the head) who in July this year, between capital increase and loan to Nordex, have had to contribute a total of €637m when a year ago they already contributed another €586m, does not seem sustainable in the medium term. And even large conglomerates such as Siemens and GE, which until recently seemed not to even bat an eyelid at the losses of their wind power businesses, now that their businesses (Siemens Energy and GE Vernova respectively) are being spun off, the losses are going to be more visible and it is to be expected that the new shareholders will not be so patient.

Here at last comes the ray of hope among so much darkness: ASP is clearly on the rise. Although, as we explained in another post, we are not big fans of this metric, it is the only thing we have to try to guess how turbine prices are evolving. And you can clearly see how SiemensGamesa leads the price increase with a 29% higher ASP in 2Q22 compared to 1Q21 (and 38% compared to the minimum in 2Q21). Vestas has also raised prices continuously while Nordex is the one that has done it less accentuated, so it is the manufacturer with the lowest ASP at the moment.

It should be borne in mind that the ASP is built on the prices of signed contracts, so until these are executed in a few months’ time, we will not know whether these new prices will be sufficient to improve profitability. My personal opinion is that further increases in the selling price are still required to compensate for the accumulation of circumstances that have caused costs to skyrocket. 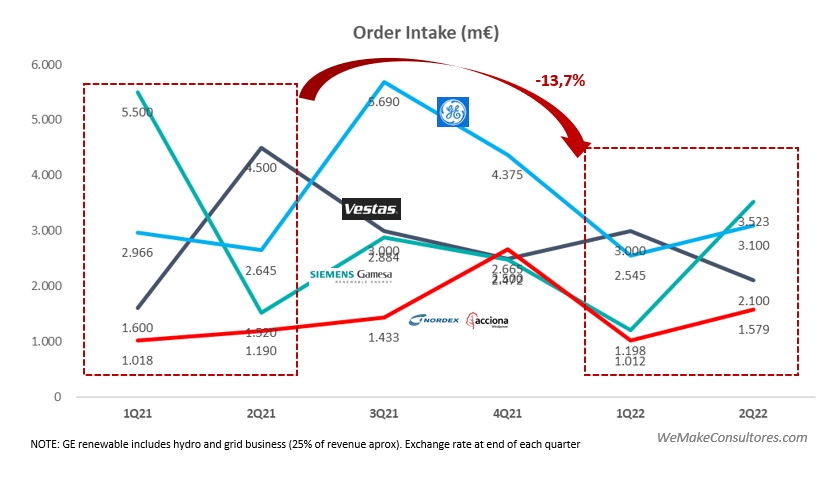 Like revenue, order intake is very seasonal with the peak in the last quarter of the year so it is advisable to compare equal periods of different years. If in our case we compare the first half of 2022 vs 2021, we see that order intake has fallen by almost 14%. This is very much in line with the OEMs’ strategy of being more selective with contracts and price increases as we have seen above. In other words, if this reduction in contracting leads to greater profitability, it is welcome, although it will have consequences on the volume of activity: fewer turbines to be manufactured, less occupation of the factories, etc.

It is indeed shocking to see this reduction in activity while we read every day that the wind power installation targets in all countries are being extended. It is clear that all these targets are a dead letter if we do not return to a profitable and financially healthy manufacturing sector. 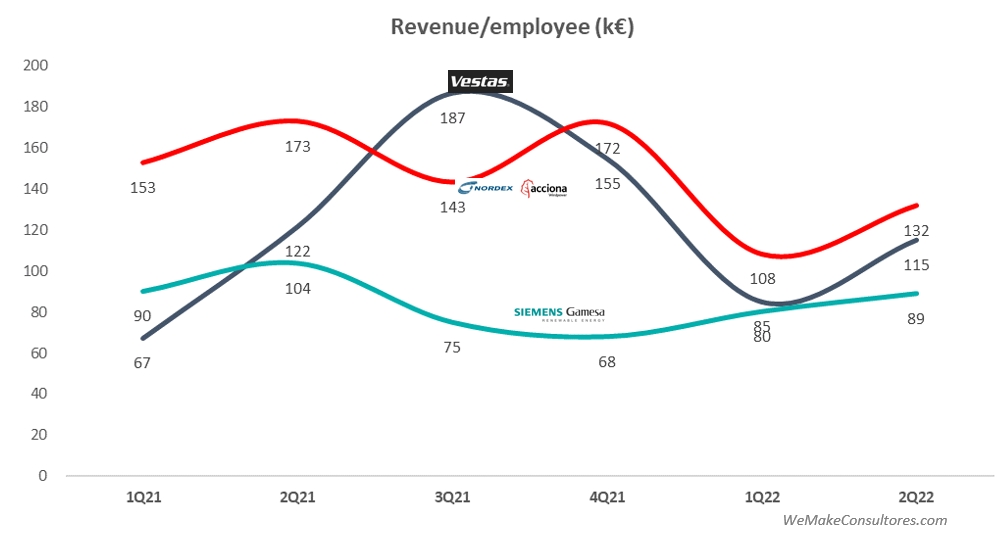 And as a bonus track, we turn to a ratio that analysts like a lot but companies like little: revenue per employee. Something obvious is clear: SiemensGamesa is sized to have much more activity than it has had in recent quarters. Nordex, on the other hand, has traditionally made the most of its workforce.

One of the problems in this sector is that demand changes much faster than companies are able to size themselves: setting up new factories, hiring qualified staff, organising sales teams, etc. are tasks that take 1-2 years while demand can change in a couple of quarters. This is where (good) CEOs earn their pay, by anticipating the market to seize opportunities or minimise problems.

Western turbine manufacturers remain in the ICU. Within the extreme gravity there are patients like SiemensGamesa with additional ailments such as the ramp-up of its new platform, others like Nordex with shareholders with limited capacity to infinitely finance the hospital admission while GE sees its transition to GE Vernova approaching so the situation may change. The only thing that is clear is that the situation is unsustainable and the solution lies in a generalised price increase and a change in the distribution of manufacturer-promoter risk for the future.

This is not intended to be a rigorous financial analysis but simply a way of visualising trends. However, it is important to mention a number of details about the methodology:

– GE renewables includes, in addition to onshore and offshore, the hydro and grid businesses, which account for around 25% of the business unit’s revenues (and are sure to contribute even more to profitability). This makes GE’s data not entirely comparable with the rest.

– GE publishes revenue and orders data separated by equipment and services but not by margin. In order to compare this margin with the EBIT of the rest, we have assumed a constant 20% profitability in GE’s services (a reasonable assumption considering the rest of the OEMs) and with this we have calculated the EBIT of equipment so that the EBIT result is the one reported.

– GE reports in dollars so the exchange rate at the end of each quarter has been applied to convert it to euros.

– Nordex reports data split into “projects” and “services”. Although I suspect that the scope of projects is not identical to the turbine scope of the others, we assume potential deviation. 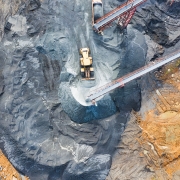 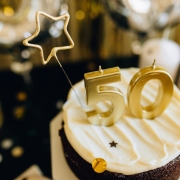 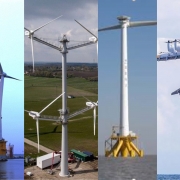 Patent Wars
Scroll to top
Gestionar el consentimiento de las cookies
We use our own and third-party cookies to anonymously and statistically analyze your use of the website, improve the content and your browsing experience and in this way offer you the best possible browsing experience. You can get more information at:
Manage options Manage services Manage vendors Read more about these purposes
View preferences
{title} {title} {title}